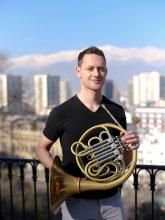 Hornist Dominic Rotella has enjoyed a wide range of experiences in his career as an orchestral musician. He performed for two seasons as Principal Horn of the Orquesta Filarmónica de Santiago (Chile) and has also held positions with the Louisville Orchestra, New World Symphony, and Civic Orchestra of Chicago. He has made guest appearances with more than a dozen professional ensembles, including the Chicago, Cincinnati, and Fort Worth Symphony Orchestras, the Nashville and San Antonio Symphonies, and the Louisiana Philharmonic. This summer, in addition to making his debut with the Lake Placid Sinfonietta, Dominic will perform as a member of the Spoleto Festival USA Orchestra in Charleston, South Carolina, and is returning for his sixth season with the Lakes Area Music Festival in Brainerd, Minnesota.

Initially a trumpet player, Dominic first played the horn at the age of 14 under the guidance of freelance hornist and music teacher John Little. He later studied under professor D. Bruce Heim at the University of Louisville, where he graduated summa cum laude with a Bachelor of Music degree in horn performance. He has received additional instruction from a number of highly esteemed teachers and performers, including Julie Landsman, Randy C. Gardner, Sarah Willis, and Peter Kurau. Currently, Dominic is continuing his studies at the Shepherd School of Music at Rice University in Houston, where he is pursuing a Master of Music degree under the tutelage of world-renowned horn pedagogue William VerMeulen.

Dominic was born in Cincinnati, Ohio, grew up in the small town of Holderness, New Hampshire, then spent twelve years in Louisville, Kentucky. He has now lived in six states and two countries and finds it increasingly difficult to answer the question, “Where are you from?”