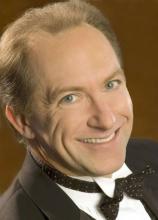 The baritone Jimi James is widely known for his critically acclaimed, energetic performances, both in staged works and in concert. The artist has cultivated a wide range of performance styles. In concert, Mr. James performs with pomp the bombastic wolf in Locke’s “Peter vs. the Wolf” and with palpable gravitas in works such as “Elijah”. Staged personas range from Giovanni Pig (“The Three Little Pigs”, music of Mozart) to Rigoletto.
Of “Rigoletto”, The Oswegonian wrote, “James, in particular, lived up to his praise from the Springfield News Leader as ‘a force of nature’, blowing the audience away with a strong, velvet tone and the clarity of his diction.” The Capitol proclaimed, “The vocalism exhibited during the performance of "Elijah" was excellent. Jimi James was superb in his rendition of the title role. What particularly distinguished his performance was that, while consistent, he was never dull and was adept with his vocal acting.” The baritone’s list of repertoire is varied and expansive. Along with Fauré’s, he performs the Requiems of Mozart, Brahms and Verdi, Bach Cantatas 68, 78, 145 and 211, Paul Moravec‘s stirring Songs of Love and War, Schubert’s Mass in G, The Creation, Polar Express, Songs of Travel, Messiah, Carmina Burana, Dvorak’s Stabat mater and Beethoven’s Mass in C and Symphony No. 9. Staged characters include Scarpia, Lord Mountararat, Guglielmo, Escamillo, Tonio, Silvio, The Police Sergeant, Leporello, Schaunard, Gianni Schicchi, Rigoletto, Enrico (Lucia), Masetto, Mustafa, Dr. Bartolo, Figaro (Il barbiere di Seviglia and Le nozze di Figaro) , Emile de Becque, Billy Bigelow and The Pirate King.
Born in Hawaii and raised on Cape Cod, the baritone finds as appealing the broad range of expression available and necessary in classical repertoire as he does in experiencing varied locales. Mr. James maintains a busy performance schedule for companies in New York, Connecticut, New Hampshire, Virginia, Tennessee, West Virginia, Maryland and Missouri, where along with the requisite skills of singer/actor, the artist adds his special talents of stilt-walking and juggling.
A strong proponent of arts’ education, Mr. James is particularly fond of his more than 900 outreach performances, including The Three Little Pigs, Jack and the Beanstalk, Hansel and Gretel, Little Red Riding Hood, Little Red’s Most Unusual Day, Never Tickle a Mule and Sweet Betsy from Pike. In fact, the artist has fond memories of several of these performances at LPCA.
The artist’s awards include finalist in the Chester Ludgin Verdi Competition in New York and winner of the JDAF Vocal Competition in New York. Recent appearances for the busy baritone have been Rigoletto in Connecticut, Carmina Burana in New Hampshire and Fauré Requiem in New Jersey. Mr. James is grateful for the rehearsal release from his current production of Die Fledermaus (Eisenstein) in the Finger Lakes town of Geneva opening July 21.